If you follow me on Facebook, you will know that i found this cute little gun cabinet @ goodwill a couple weeks ago.  I actually saw it then decided against it because im trying not to buy any more projects, but then i couldnt stop thinking about it all night.  It had good potential and it was cheap :)

Luckily, when i went back the next morning it was still there… lovely fake etched glass and all :) 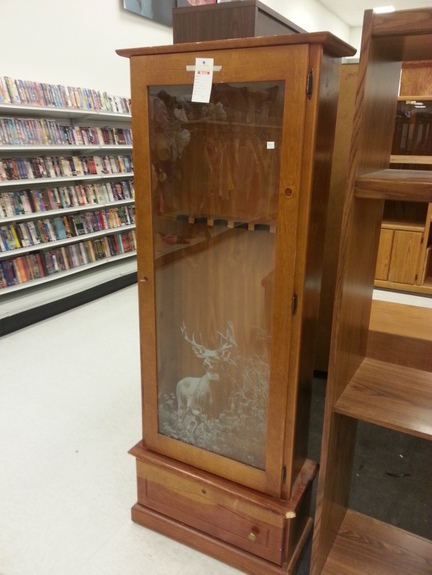 I knew i wanted to add a couple shelves and add something to the back.  I ended up just going through my scrap bin and using what i had.  I also wanted to add crown molding, get rid of the lower cabinet, update the base molding, and get rid of the glass (i had plans to replace the glass with chicken wire, but i sold it before it was done and she wanted the glass). I cut my reclaimed wood down to size for the back to make a “plank” look.  Then i added two simple sheves, crown and base molding. After the building was done, i taped off the back to protect it from paint.  I filled in all the nail holes and then gave everything a light sand.   To paint this piece, i used Sherwin Williams pre-cat lacquer in white in a dull rubbed finish.  I havent worked much with lacquer besides over the past few weeks – and i really like the stuff!  It takes the right project, i wouldnt do it on everything, but it gives a really nice finish that you just dont get with latex.

I ended up selling the cabinet before it was finished and she wanted the glass rather than chicken wire that i was planning.  Luckily the glass that it came with only had a fake etching on it and i was able to get the oh so awesome deer off with a little lacquer thinner. Whatcha think?  Got an old gun cab that could use a facelift?!  There are so many possibilities!!

Too see another gun cabinet transformation go here!!  I took an old large gun cabinet and turned it into a craft hutch! My Big Fat Announcement to the World!!
Scroll to top
Flash Sale!