A few days ago I posted about our next big project, the basement.  Last weekend we were able to get a little DIY’n in and it made a HUGE difference!!!

I have always loved the look of beams and knew that we had to get them in this house somewhere – so, why not the basement?

It was the perfect space to put them in, especially since we decided to leave half the basement as one big open space – the beams really help break it up and I love the character that it adds.

And, the best part?  These beams were super cheap and SO EASY!!  And, the entire project took about 3 hours – sweetness.

K – I did some research on beams and thought maybe we should do the faux Styrofoam ones – way pricey.  then I was going to make a hollow box with mitered corners – way time consuming.  Then, I was looking at some pics on-line, went to my shop and grabbed some 2×4 scraps and constructed a little beam.  It wasn’t the way the ones on-line were made, but mine looked just as good as way less work.   Again… sweetness.

Basically, its just made up of 4 2×4’s.  One that is hidden and attached to the ceiling, one directly underneath, and one for each side.  And I love that the side 2×4’s drop down a little lower than the middle one – lots of on line pics were that way. 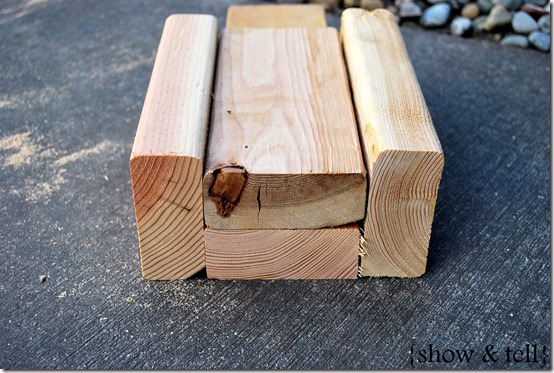 I put my husband to work putting up the 1st board on the ceiling – this one is hidden, so don’t worry about stain.  We made sure that we hit a stud and used liquid nails and a nail gun to attach it. 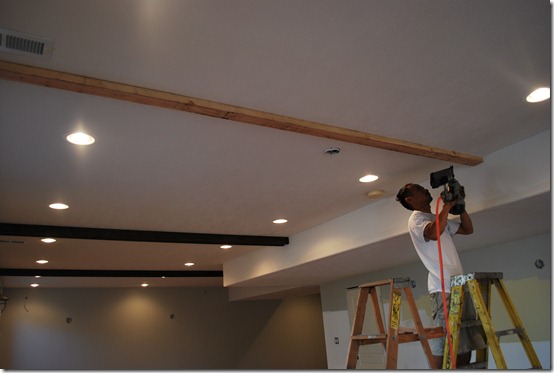 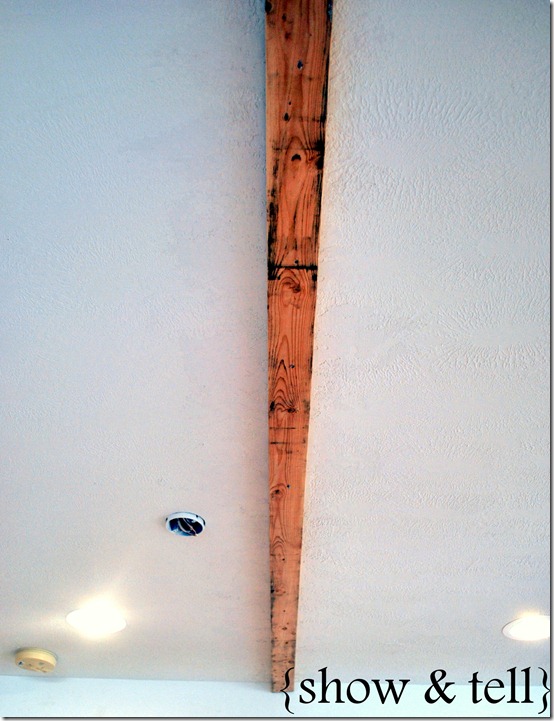 Then, I put Santi to work staining the bottom and sides of the beam. 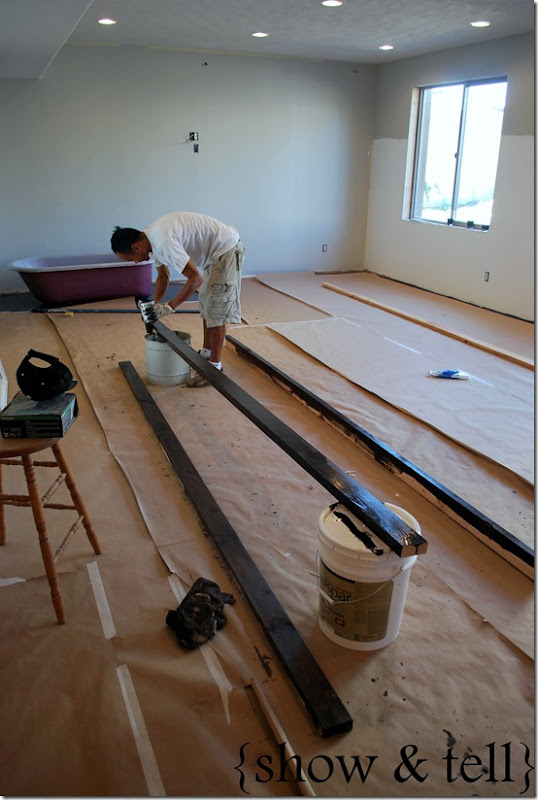 Then, the bottom board was nailed to the “hidden” board – again with the nail gun and liquid nails.  We probably should of used screws – but we didn’t.  And everything is fine – no boards falling on our heads yet :) 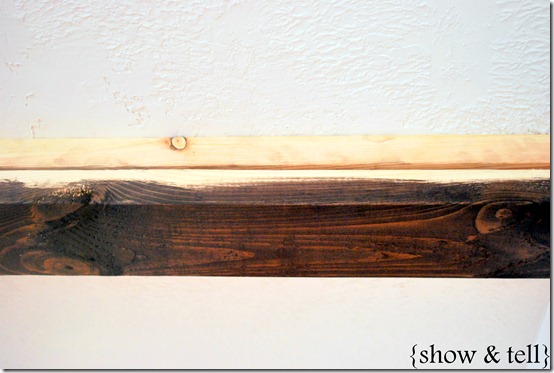 Next, I put Santi to work putting up the side beams.  Do you notice a pattern?  Santi doing all the work?  Ya right!!  Its harder being brains than labor – us girls all know that:) 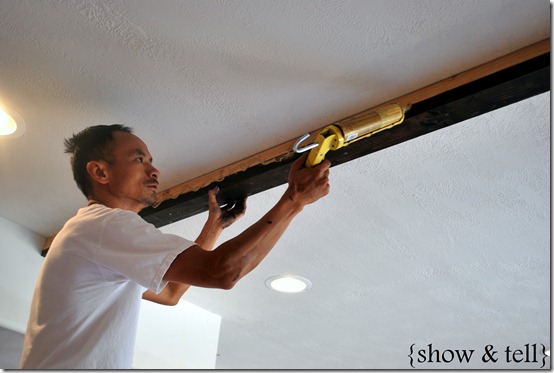 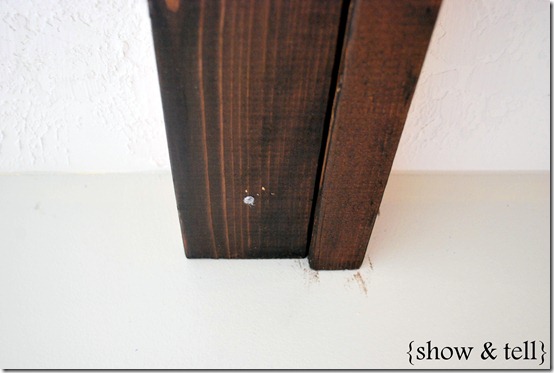 And lastly the 4th board was added to the other side, and WA-LA, instant beams!!  SO easy huh?! 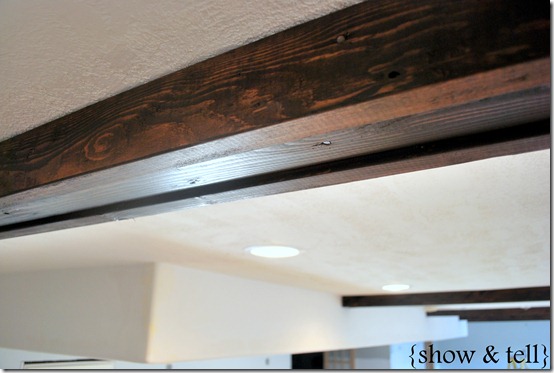 We did go back over all the nails with a little bit of stain so they blended in. 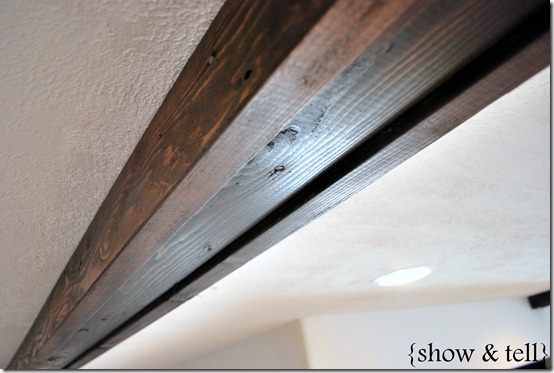 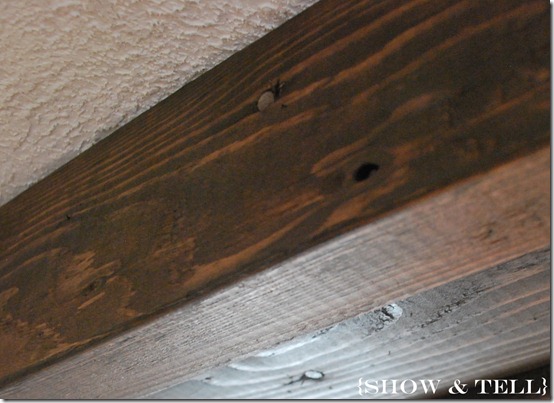 And, just so you can see the difference that these make – here is a before & after – I love how it broke up this huge room and makes it seem a little cozier.  Plus, the runway lights were a little crazy – so this really helped it not look like an air strip. 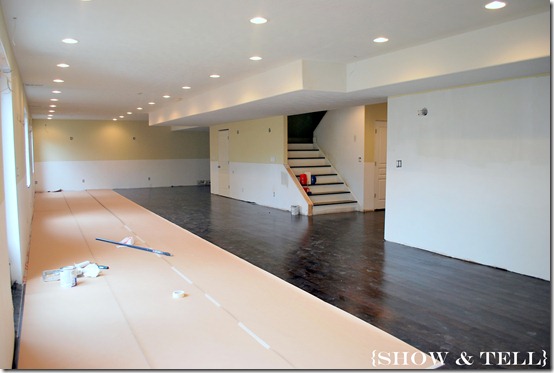 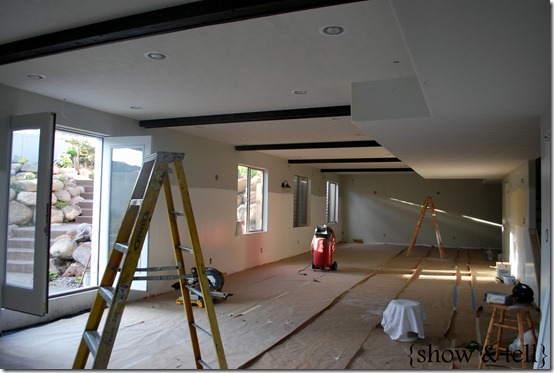 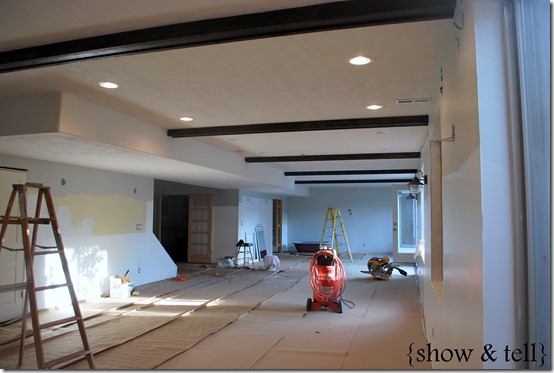 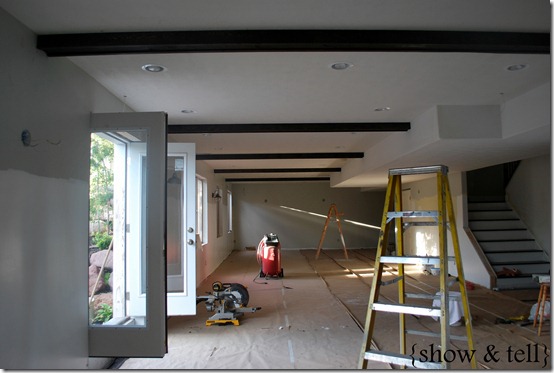 SO- $160 dollars and a couple of hours!!!  love projects that are super cheap and have such a big impact!!

And notice my wall color has changed?  I painted it Lattice by Sherwin Williams – SO.MUCH.BETTER.THAN.THE.YELLOW.

Where else can I put up some faux beams?!  Hmmmm…….