Oh how i love slip covers – especially white slip covers.  I have wanted them forever and why when we bought our couches 4 years ago we didn’t buy them then – i don’t know.  But i have them now :)

If you have been following me for a while – you know that before Santi came home from Iraq – like a weekend or so before – i ripped up my couches (back cushions were attached) and made my own slips in a 2 day weekend.

They turned out pretty good i thought for being a self taught sewer and being in a time crunch.  But i wanted piping and zippers and my sewing machine couldn’t handle all the layers – so i had to give up the idea of piping, and then i was just too lazy to figure out the zippers.

They worked for a while – but i decided that i wanted to have them professionally done – and i am so glad i did.  I couldn’t be happier with them – seriously sometimes i walk into the room and just stare at them, they are such cute, comfy little things :)

And, so many people ask me about the white.  People tell me that they could never have white with their kids and dogs.  But, that is exactly why i have white.  I have kids and dogs.  White is the only color that you can throw  in the washer and bleach – then they are as good as new.  I will never have a regular couch again (if i have my say and i usually do) – they will always be slip covered.  Seeing how dirty these things can get – and then the only reason i am seeing the dirt is because they are white – imagine what a darker color sofa is hiding?  yuck.

Since i have got them (early Dec 2010) i have washed them about once a month.  Just wash them in cold and hang them to dry.  I like the semi-wrinkled look – its looks more relaxing to me.  PLUS – if just one gets spilled on or dirty – its so easy just to throw that one in the wash.

Before – couches getting ready for their new digs (my couches had attached back cushions, but i wanted loose ones, so i took those off and bought some big fluffy pillows to use instead – so much better) 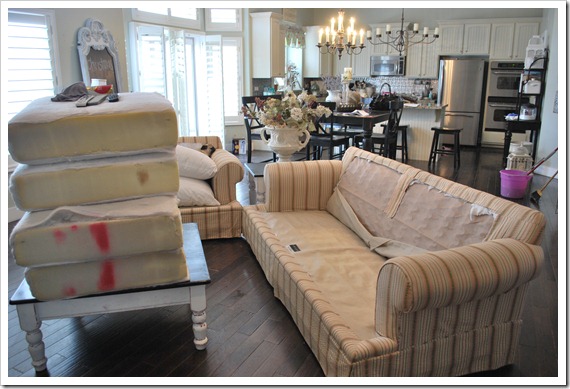 And after – so much better.  Doesn’t it make the space look more relaxed and fresh?  Why.. yes it does!! 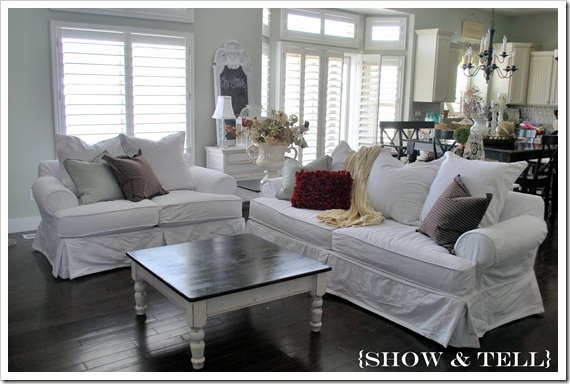 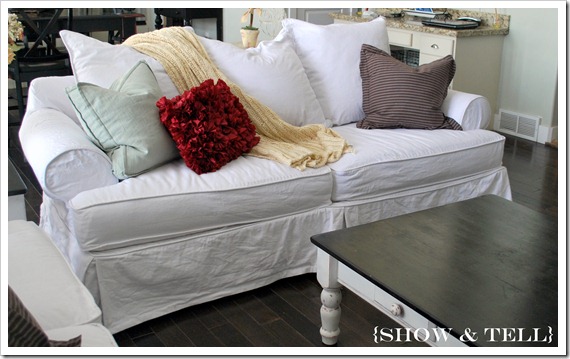 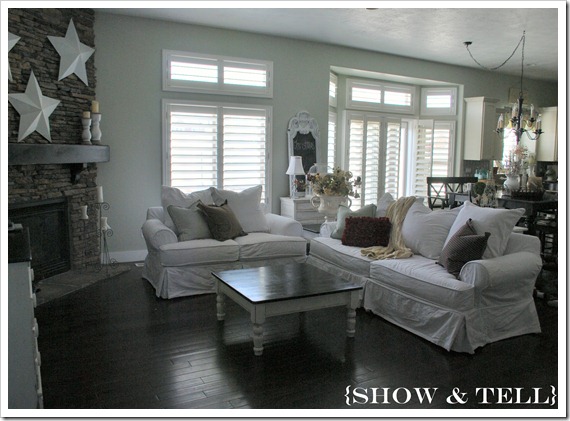 So, if you are in need of some slips – Shelley with Custom Slipcovers by Shelley did a great job – seriously, so well made and easy to get on and off.  I have one more chair that goes in that room that i need to get done as soon as i can figure out what i want :)

{Distressing with an electric sander} {Sewing table – before & after}
Scroll to top
Welcome!